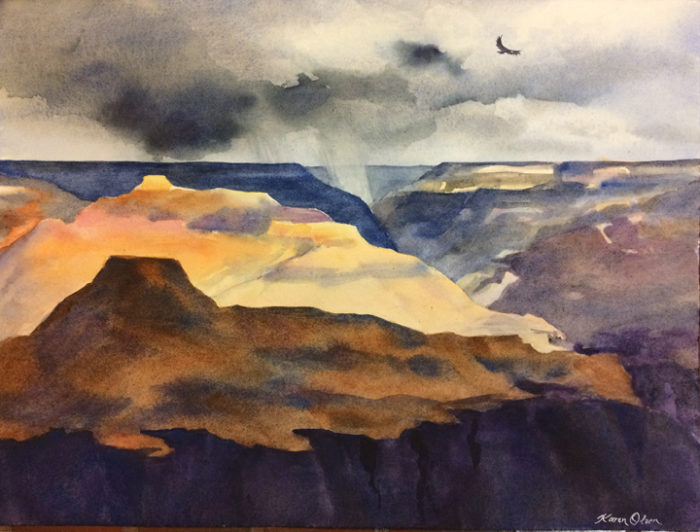 As I hike and paint at Grand Canyon, I often have tunes in my head.  I don’t mind having tunes in my head because, though they may range from Mozart to Lady Gaga, they have some way of connecting with what I am seeing and painting out there.

At the same time, I sometimes think, I haven’t yet heard the real music of Grand Canyon.  That is, if God were to send down THE exact right music for this place, what would it be?  There is good music explicitly meant to depict the canyon—the signature, of course, would have to be (duh!) The Grand Canyon Suite.  I like this music well enough—it’s competently crafted by an accomplished American composer, Ferde Grofé—but somehow it doesn’t connect with me emotionally.  (I am afraid that’s because of the long association of the movement called On the Trail with cigarette advertising.  Yes, I know. My age is showing).

That changed for me last fall.  God sent the music.

The National Park Service offers all kinds of educational and cultural programs for park visitors, and they are nearly all free of charge.  I was lucky enough this time to have come to GC on the day the annual Grand Canyon Music Festival would be presenting its final concert.  I had barely enough time to set up my tent before I had to get over to the Shrine of the Ages (multi-use facility for lectures, concerts, films, and other events) to catch the concert.

It was a lovely concert featuring some wonderful music and artists, among whom was a beautiful young French horn player named Johanna Lundy (http://www.tucsonhorn.com/), whom I would love to introduce to my 12-year-old granddaughter who is a budding horn player.  All nice and lovely to hear.

But the last presentation in the concert knocked me totally for a loop!  It was strange, weird, bizarre, and a thing of sublime beauty.  It captured for, like nothing else had till then, the ineffable soaring spirit of Grand Canyon.  It was a movement of a concerto for, of all things, the HARMONICA!  (Classical music for the harmonica? Who knew!)  It was written by Russian composer Alexander Tcherepnin.

I don’t know whether he ever visited Grand Canyon, but do, please, listen to it.  Maybe you’ll hear Grand Canyon in it, like I did.  And while you do, if you like, look at some of the paintings I made while I was there. https://www.youtube.com/watch?v=6cAIu8VE3V8