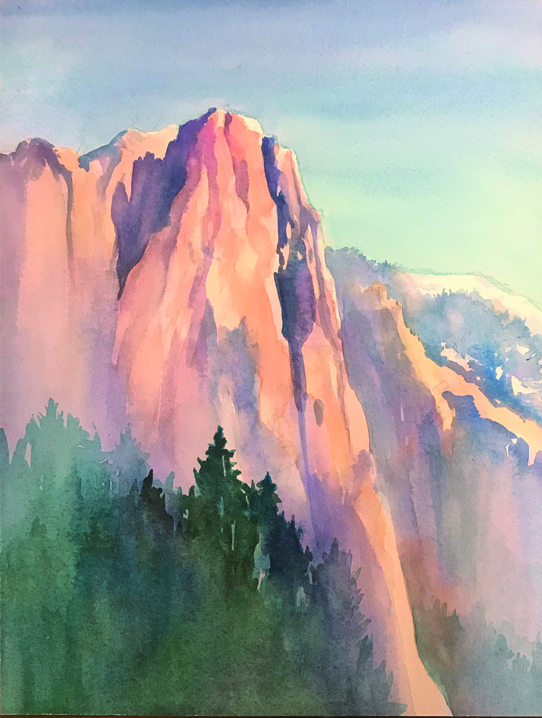 Everyone knows Half Dome and El Capitan. These spectacular mega-monuments stand alone in the eyes of the world as icons of Yosemite, made world-famous by the brilliant photography of Ansel Adams. But there are also others—stony needles, razors, sawteeth, and cliffs with precisely vertical smooth-as-glass faces reaching 1,000 feet, 2,000 feet, 3,000 feet from earth to summit, just like El Cap and Half Dome, that are not so well known. Sentinel Peak is one of these. It’s not an icon, but that in no way minimizes its splendor.

There is kind of a goofy story behind this painting of Sentinel Peak. Yosemite is not far off the road I take back and forth to the mountains for skiing. Sometimes on my way back from a ski trip, I make a quickie latish-afternoon trip into the park. This particular day was just a few days after a big snowstorm, and the waterfalls were FLOWING and wonderful to see! And the weather was chilly but beautiful. So I drove into the park, stayed just long enough to make a few stops and collect some nice photos, and then headed home. Or so I thought.

The road out of the park from the valley floor follows the Merced River and reveals a marvel around every corner. Near sundown, the right side of the river was deep enough in shadow that I had my headlights on, but the left side was absolutely aglow with the golden and rosy colors of oncoming dusk. I was stopping every two minutes to run down to the river and get a clear look and a photo. And as the sun lowered, the scenes just got better and better.

There’s a point on that river road where you have to make a right turn to get back to the highway that heads back to the Bay Area. I got so taken up with all the stopping and looking and shooting, looking LEFT, across the river, at all those peaks and cliffs, that I had no clue that I had sailed right by the turn-off.

At some point, I was saying to myself, “Where the heck am I?” NOTHING was looking familiar! I wondered whether I should turn back, but I had been on this road before, granted probably at least twenty years ago, but surely I knew where it went. I decided to keep on. BAD MOVE! I did NOT remember that it was a narrow, twisty-turny, seldom-traveled road with NOTHING but vast, thick dark growth either side. And dark had fallen very fast! I was soon feeling as if I were driving through a tangled, troll-infested forest, and the slow going through severe and frequent curves was a bit unnerving. But I continued on for many miles. Eventually the sense had begun to build that I really DIDN’T know what road I was on. There was no cell access, so I couldn’t check my GPS, but mercifully just about then, I came into a little teeny settlement. There were only a few buildings, but one was a restaurant. I had gotten very hungry by then, so food was a good idea, but more than that, I wanted to know where I was! Turned out to be El Portal, which didn’t help much, because I had never heard of it. But the young lady that waited on me was smiling and sweet. She gave me some fish and chips, plus all the intel I needed. It was another 30 or 40 miles from Mariposa, she said, where I could pick up a cell signal, and about an hour from the Merced intersection with Highway 99, which would lead to the road that would take me home. In Mariposa I called my husband to let him know I would be back much later than expected, and asked him please to wait till morning, after I had gotten some rest, to razz me about this ridiculousness! I didn’t make it home till after midnight, and I’m sure I fell asleep before my head hit the pillow. And yes, my husband did tease me…a little! I deserved it. BUT I GOT THAT PHOTO! And I made the painting.